When we arrive, the mood is glum as the residents focus on an uncertain future.

We want to take the barriers off the front windows – speak to the street.

Outside, it’s raining on commercial road. A voice floats in: shoul we ‘ave chicken, or meat box? The street speaks to us.

After a week of rushing, rushing, it feels so good to be still in the cool dim room and work. like we’ve escaped to a country cottage, only we’re in mile end. we remark again and again how sad it is that this space – a home and a refuge – is going to be taken away by the ‘owners’; as if ownership works like that.

We’re both talking about JK when we say HE. ‘Freud? dude loves Freud. We’re so on the same wavelength our conversation becomes a ping-pong of words, look up, read quote, question?

We talk about Ana Mendieta and Lee Lozano. In my mind they are patron saints of this work. From Wikipedia:

‘Ana Mendieta died on September 8, 1985 in New York from a fall from her 34th floor apartment in Greenwich Village’s 300 Mercer Street,[22] where she lived with her husband of eight months, minimalist sculptor Carl Andre. She fell 33 stories onto the roof of a deli. [23] Just prior to her death, neighbors heard the couple arguing violently.[15] There were no eyewitnesses to the events that lead up to Mendieta’s death[24] A recording of Andre’s 911 call showed him saying: “My wife is an artist, and I’m an artist, and we had a quarrel about the fact that I was more, eh, exposed to the public than she was. And she went to the bedroom, and I went after her, and she went out the window.” In 1988, Andre was tried and acquitted of her murder. During the three-year trial, Andre’s lawyer described Mendieta’s death as a possible accident or suicide. The juror found Andre not guilty on grounds of reasonable doubt.

The acquittal caused an uproar among feminists in the art world, and continues to remain controversial to this day. In 2010, a symposium called Where Is Ana Mendieta was held at New York University to commemorate the 25th anniversary of her death.[26] In May 2014, the feminist protest group No Wave Performance Task Force staged a protest in front of the Dia Art Foundation’s retrospective on Carl Andre.[27] The group deposited piles of animal blood and guts in front of the establishment, with protesters donning transparent tracksuits with “I Wish Ana Mendieta Was Still Alive” written on them. In March 2015, the No Wave Performance Task Force and a group of feminist poets from New York City traveled to Beacon, New York to protest the Andre retrospective at Dia:Beacon, where they cried loudly in the main gallery, made “siluetas” in the snow on museum grounds, and stained the snow with paprika, sprinkles, and fake blood.’

I remember being in New York while this protest happened at the Dia. There was an image in the newspaper of a young woman, possibly an assistant at the Chelsea gallery, gingerly stepping over the blood with a bucket in her expensive shoes, a woman sent to clean up the mess again.

I imagine one of Mendieta’s Silhuetas in the garden space of AA; visitors stepping over and through the outline of pigment or petals. By chance, I received a book in the post as we left the house this morning: Bhanu Kapil’s Ban en Banlieue. In the blurb, a piece of synchronicity: ‘Drawing equally from the works of Theresa Hak Kyung Cha and Ana Mendieta, Ban traces an outline around the charred remains of those disposable bodies, “both dead and never living,” marking the borders of national belonging and permissible sexual violence.’ Stepping over, stepping through, marking a border. 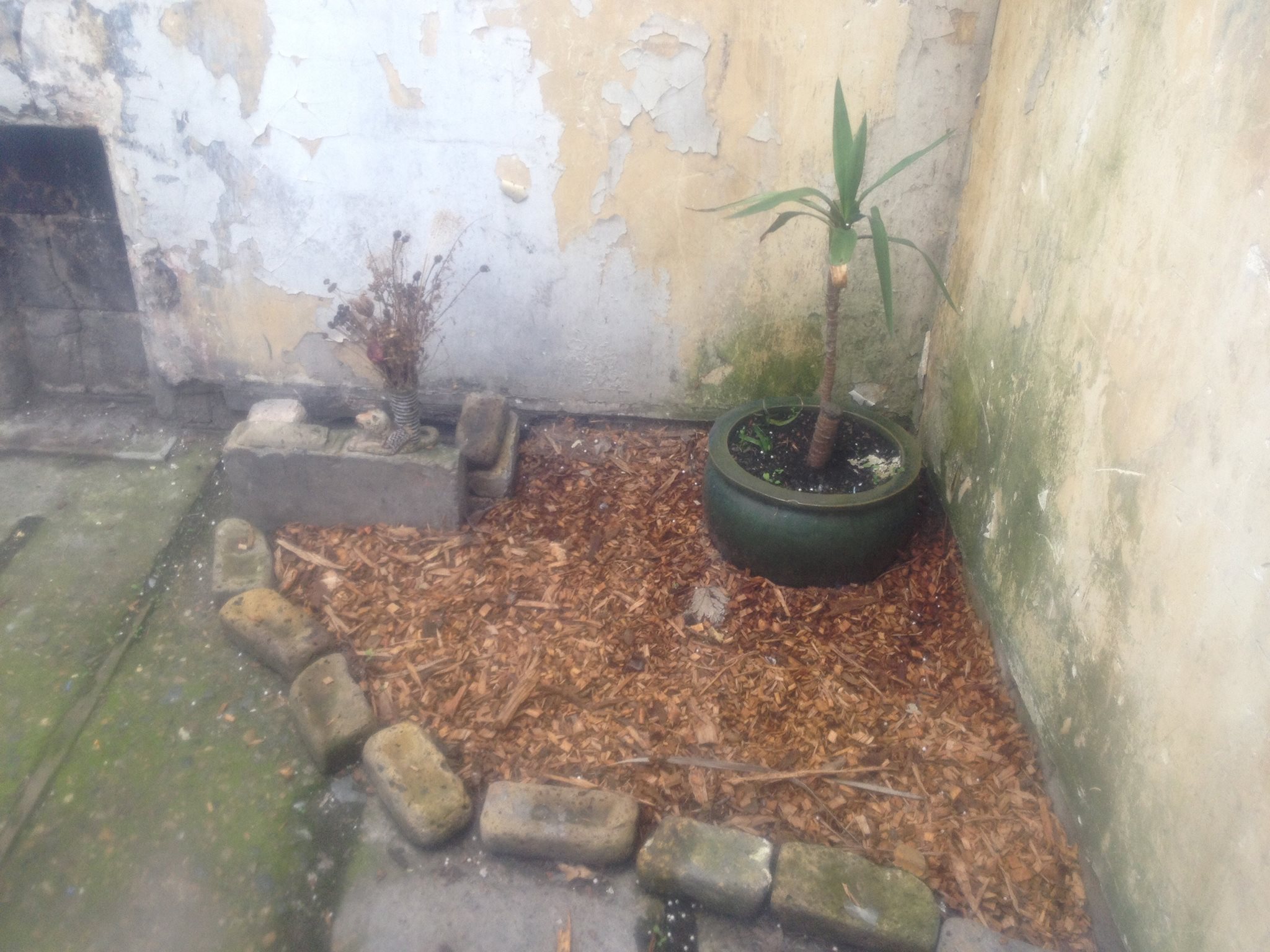 ‘Hetero-partitioning’ refers to the isolation of certain body-parts turning them into sexual signifiers while leaving any bodily totality unthinkable. I’m thinking of Preciado’s Contrasexual Manifesto as I’m cutting, distorting, sewing and sticking condoms together. Hetero-partitioning reproduces and fossilizes sexual difference. The condom – the barrier – constructs a bipolar relationship between the partitioned hetero-sexualised parts: the pussy and the penis; the penetrator and the receiver; the perpetrator and the victim. Subverting this lubricated barrier into one of resistance and neglect opens up possibilities for sewing together lost bodily totality or creating disruptive sexual signifiers confusing patriarchal conceptualisms.